KEY MESSAGE
Through "Roots of Rebirth", Van Herpen notions towards the miraculous lacery of interconnectedness from the natural ‘wood wide web,’ weaving a dialogue between the terrestrial and the underworld. During such rarefied times, the designer explores a symbiosis of high technology and the artisanal craftsmanship of couture, through a collection that references the intricacy of fungi and the entanglement of life that breathes beneath our feet.

OUTCOME
"Roots of Rebirth" extends its own branch, an invitation to a sequence of 21 looks inspired by roots and spores. During the show, the models seem to magnetise a living lace of spores with each stride, the entanglement of each garment resembles roots of regeneration. Two looks embody the "henosis" technique, in which multiple translucent layers of duchess fabric were dyed in pastel hues, forming a "mantodea'" motif. An off-white laser-cut venation formed by a myriad of hovering fins sprouts outwards, radiating each motion into a delicate lacy array of invisible interconnectedness. In other creations, hand-embroidered roots surge and symmetrically entwine the body in transformative tones, from liquid copper to deep shades of burnt umber. Hand-pleated mahogany silk was draped to fan out into hemispheric blooms. 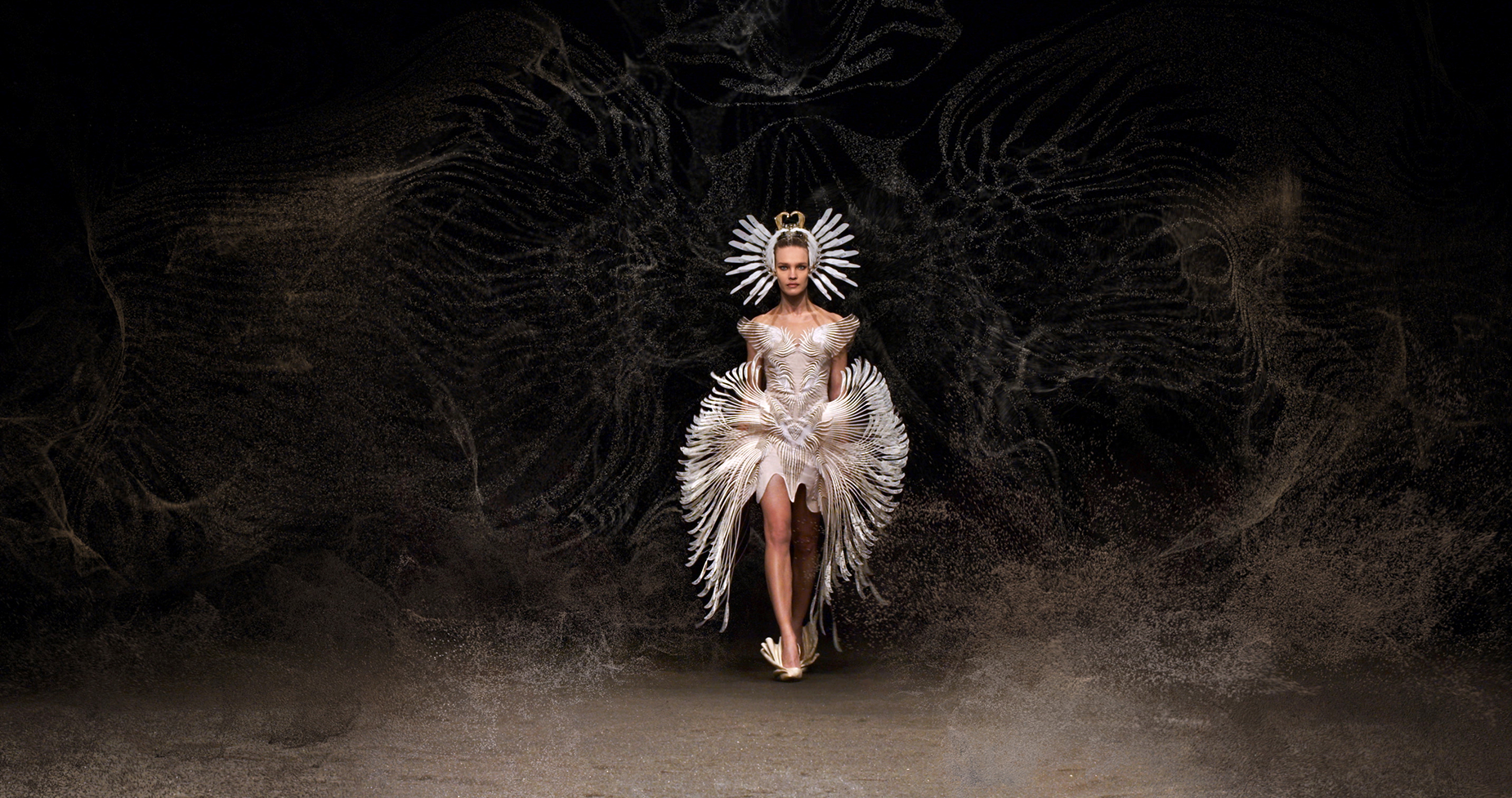 "Thinking about fungi makes the world look different. These astonishing organisms challenge our animal imaginations and make questions of many of our well-worn concepts, from individuality to intelligence.” - Merlin Sheldrake

In reference to the book penned by scientist Merlin Sheldrake, "Entangled Life"

The work of Iris van Herpen is often described as ethereal and transcendental; a chimeric exposition, radiating shapes that reference the relationship between the human body and the natural world. This season, the Dutch designer explores the rich, yet deeply fragile interconnectedness of an unfamiliar world, the enigmatic fungi empire and the life-bearing fine threads of mycelium. The collection details the extraordinary existence of this winding ‘fabric of life,’ the marvelling world of undergrowth tapestry. In reference to the book penned by scientist Merlin Sheldrake, ‘Entangled Life’ notes that ‘fungi is the ecological connective tissue, the living seam by which much of the world is stitched into relation.’ 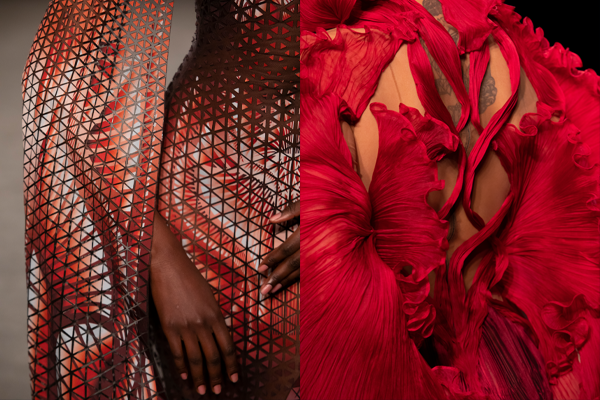 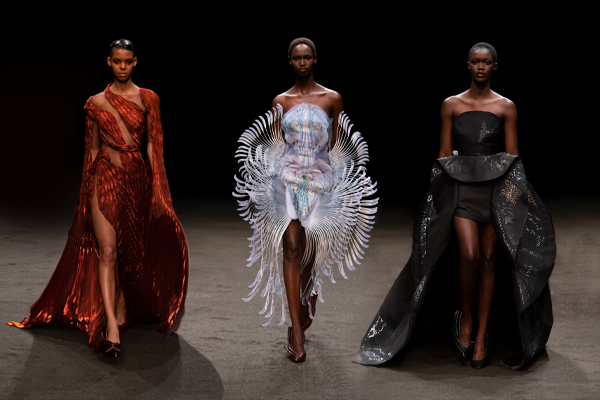 The interlaced organism has truly shaped our surroundings, despite its often unseen efforts underground, it underpins Earth’s ecosystems.Through the infinite interactions beyond our daily comprehension, these networks embody undiscovered growth and intelligence. It is this "ecological connective tissue" that enhances the circle of life, and its constant exchange of information bares many parallels with urban environments. The primordial appearance of mycelium threads, in constant communication, are microcosmic of our functioning society, from the circulatory system within us; branches of trees; rivers touring through landscapes; to the modern ingenuity of transport or the digital web of the internet. 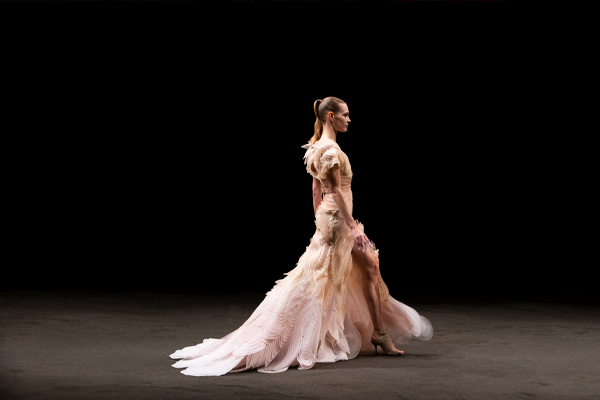 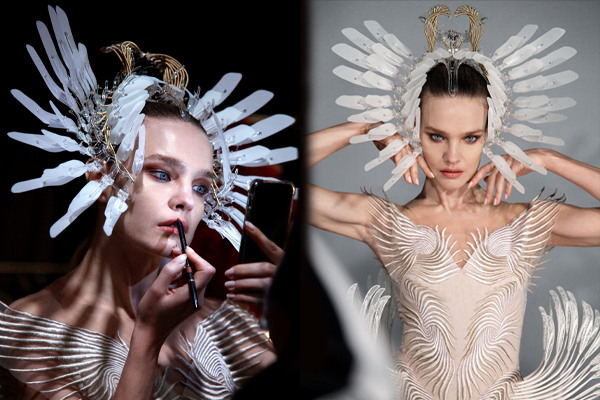 Iris van Herpen amplifies her kinetic ethos, citing the constant state of metamorphosis in the fungi queendom. Two kinetic crowns were created in collaboration with artist Casey Curran, each gently shape-shifting their silhouette, continuously re-framing the visage. Eighteen transparent monofilament threads snake their way through a series of 18 brass coils, arranged to create a serpentine motion in the lifting and falling of each quill, symbolic of the turbulent motion of our minds, through which we rectify our reality.

The unseen splendour of each garment echoes fungi activity, in which glass-organza were intricately pleated in an ombré of white to vivid amber, branching out from a hand-embroidered bodice to form fractal networks. A mosaic of fine-edged liquescent gills were 3D embroidered onto expandable lace, laser-cut to parametrically reveal fine details of skin between amethyst hued fibre. As fungi maps the skin of the earth, such is also the composition of Van Herpen’s Haute Couture. In another look, Ocean Plastic® fabric made from up-cycled marine debris by Parley for the Oceans was printed and incised into thousands of fine trilateral tessellations, initiating a fragile symbiosis with the skin through seamless gradients in translucency.

The mysteries of the undergrowth influence the composition of our sacred planet so selflessly through shape-shifting silhouettes that bring the promise of a renaissance and regeneration. The collection is a performance dedicated to the importance of our being and the valiance of nature. With the persistence of time, evolution prevails, and while these beings are never truly fixed, they exist merely in a state of flux, a rippling fabric of life itself, dancing to the benevolent beat of rebirth.