KEY MESSAGE
The artistic director was trying to define the term "psycho chic" for Elsa Schiaparelli, while reflecting on two sides of the woman behind this Maison: Elsa in the City and Elsa on holiday.

OUTCOME
The collection offers something more than just clothes for the city and holiday, it offers a contemporary interpretation of a woman fascinated by the dawning of the technological age, of advances in fabric and engineering, of the avant-garde in film and art.

"The term "psycho chic" may not have existed in Elsa's time—nor, admittedly, now! —and yet it’s how I always explain her and her vision to myself," stated Daniel Roseberry. "This was a woman fascinated by the dawning of the technological age, of advances in fabric and engineering, of the avant-garde in film and art. She was a patron of the arts, and an artist herself, but she was also a scientist of a kind, someone who celebrated innovation and progress of all kinds: creative, social, cultural."

And yet who was she at home, or on holiday? Who was she when she stepped off the stage, when she was alone, away from the glittering Parisian demimonde? What does the Schiaparelli woman wear when she’s not—to use a beloved term from drag—serving?

Elsa in the City

On one hand, there is Elsa in the City: Here, the codes of the house (the Surrealist jewellery, the playful, pliable fabric breasts, the exaggeration and displacement of body parts) meet twists on classic ‘70s-era French ready-to-wear language—horse-bit closures are re-imagined in Schiaparelli hardware; the classic miniskirt-and-jacket set is remade in white denim, trimmed in crispy patent leather; a floral print is remixed into a slouchy, sequinned pantsuit.

On the other hand, there is Elsa on Holiday- though these are not just holiday clothes for a physical destination, but for a state of mind as well: They’re pieces for a literal escape, but also an escape from reality, a wardrobe for a Lynchian landscape, where the imagination can roam without boundaries. For this state of being and mind, there is fantasy swimwear, like a multi color striped knit onesie made of dry, hand mercerized cotton; or a fluid, black silk dress, one that appears to have been draped directly on its wearer; or as weeping belted caftan made of tropical silk viscose, its red-and-white stripes nodding to the iconic beach umbrellas that, in summer, adorn the Mediterranean coastline. The silhouettes are easy, but the spirit of the house—its daring, its hatred of the banal and the good-enough—remain intact. And for every look, there are updates on our accessories: oversized earrings and necklaces in brushed-matte finishes; snakeskin shoulder bags in that same umbrella stripe; a polite-but-not variation on our classic Secret bag, named for its signature hardware padlock. 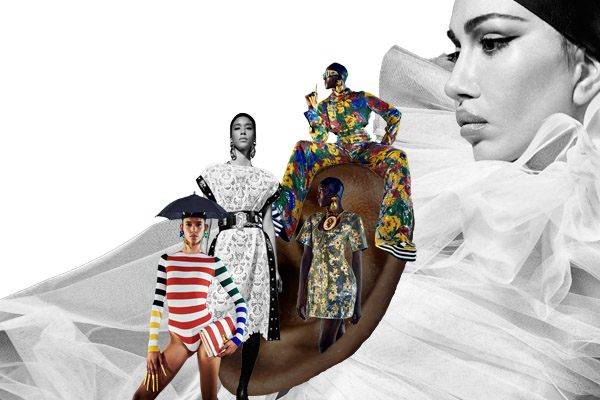 Who is Roseberry's Elsa?

So who is City Elsa and Seaside Elsa? She’s refined—but barbaric. Chic—but a little vulgar. Conservative—but uninhibited. Tailored—but also relaxed. Private—but also performative. These dualities were what made Elsa who she was, but they’re also what makes every woman who wears Schiaparelli, who she is, as well. She’s irreducible, and because of that, inimitable. She remains who she is—even when no one’s watching.

Who was Elsa Schiaparelli?

From her inventive imagination and revolutionary visions on sportswear, Haute Couture, art, fragrances, ordinary elements turned into elaborate creations, Elsa Schiaparelli instilled a creative spirit in 20th Century fashion. Her iconic collaborations with artists like Dali, Cocteau, Man Ray and Giacometti, became legendary.
Artists inspired her as much as she inspired them. A true artist herself, she was always creating new shapes, inventing new colors, thus redefining new standards of beauty.